You are more than your identity

Precommitments are basically tripwires. Someone went snooping around Wikileaks infrastructure, or the Ecuadorian embassy, or tried to pressure a diplomat, and the precommitment was unleashed.

Most of us can't do anything with the keys he dropped. Those keys were meant for the NSA. They will be able to scan the insurance file to find where to apply them. This will confirm that the insurance file is the geopolitical nuclear bomb officialdom should fear. He is bypassing his diminshed media power and public participating with those precommitments and sending a message directly to the [pratorian guard running the show].

If Assange dies, the whole thing is unleashed. If additional automated tripwires are hit, further precommitment will be automatically unleashed. If Assange even feels threatened, additional precommitments will be unleashed. The powers that be will, literally, have to shut off the entire internet for the whole planet for a few days if they want to kill Assange... and even then, that's no guarantee.

Fortunate for them, President Obama is drumming up "cyber war" as the reason for such a widespread internet blackout to do exactly that.

The Council on Foreign Relations and Goldman Sachs have made their support of Hilary Clinton very clear. Google's search engine is trying to keep such support a secret. Saudi Arabia's massive influence over oil markets and petrodollar stability, however, doesn't give them the power to be overt in such support:

From influential foreign policy think-tanks, to American tech monopolies, to Iron Age chieftains who controls the fate of post-Industrial currency, the prime movers of the world are backing Hilary Clinton. This makes sense since these powers completely pocketed much of the liquidity freed up by the Clinton's Pandora moment with repelling Glass-Steagall. And despite the massive surge of wealth Saudi Arabia and Google accumulated from this late 90s event, these two entities still fear being open about their support for Clinton.

Based on this this fear, I would like to propose an idea called the shadow emperor hedge.

Below is a chart providing a high-level view of the countries that spend the most on defense. 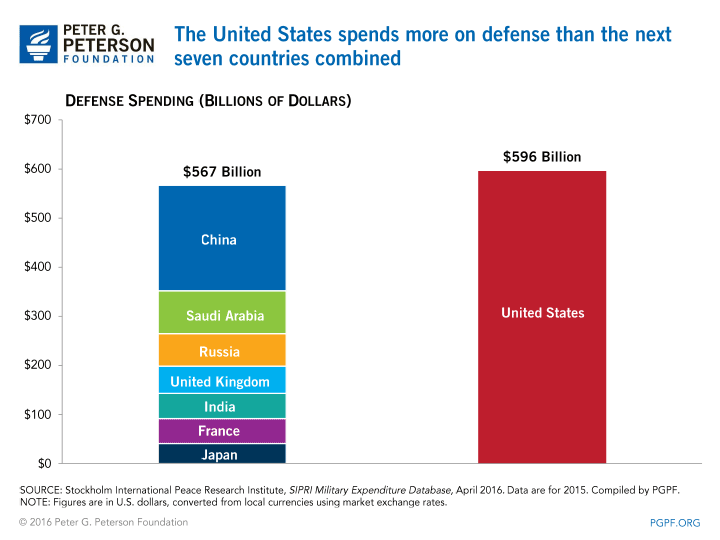 What we see is a very significant gap for other powers to spend as much as America does on defense. This is mostly due to America controlling and protecting the interests of the reserve currency.

Next, I will point out that, with the passing of the Citizens United ruling, corporations are allowed to spend as much as they want to influence American elections. Saudi Arabia has made it very clear that clean energy technology and fracking are significant threats to its power. In fact, they've already utilized Citizens United to funded opposition to Democratic and Republican senators in Missouri and Wisconsin.

Thus, the shadow emperor hedge can be summarized as,

Foreign powers will utilize Citizens United to pay tech companies to steer the American electorate into supporting state policies that only benefit the foreign powers. This allows a foreign power to achieve influence over their regional peers without having to increase defense spending since American military assets are steered via state policies.

As long as American military spending is geared towards reserve currency preservation, the marriage between foreign powers, tech media, and Citizens United will flourish.