As political materialism compels the United States to expand credit and domestic spending, the USD inflates. This causes foreign nations to inflate their currency as well to lower the cost of their exports so Americans can continue purchasing exported goods with the now weaker USD. This process is a death spiral that saps wealth from America, first by destroying the purchasing power of the dollar, and again by driving the price of labor worldwide to even lower prices, allowing manufacturing (and now many services) to relocate abroad. This mechanism has been the primary cause of the tremendous wealth gains the rich have received since the 1970s.

Since the 1860s, there have been many attempts to "modernize" the world. This pressure comes from industrial age titans (and the banking cartels who promote inflation to justify their position) seeking new markets to emulate previous growth and maintain the progressive narrative that "the future is always better." However, societies that have never had an industrial revolution cannot consume industrial age goods profitably. Therefore, the only option left is to transfer wealth from the original industrial nations into these post-Iron Age societies so that they will demand the goods of the industrial age titans. The petrodollar (Needing USD to buy the oil that powers the infrastructure to get your labor modernized) and exporting inflation (race-to-the-bottom wages for said labor) are the vehicles for that transference.

The moral smoke screen for this entire operation since the 1940s has been the "religion of equality" where the "noble savages" who have failed to demonstrate a technological mastery over nature have "so much wisdom to teach u_s" while previously successful industrial societies are "evil, racist, imperialists who need to atone." This guilt-based narrative is the lash that forces compliance of even the most destabilizing of immigration policies, union destruction, tax reforms, corporate bailouts, identity politics, and every other manifestation of the "_progressive agenda". 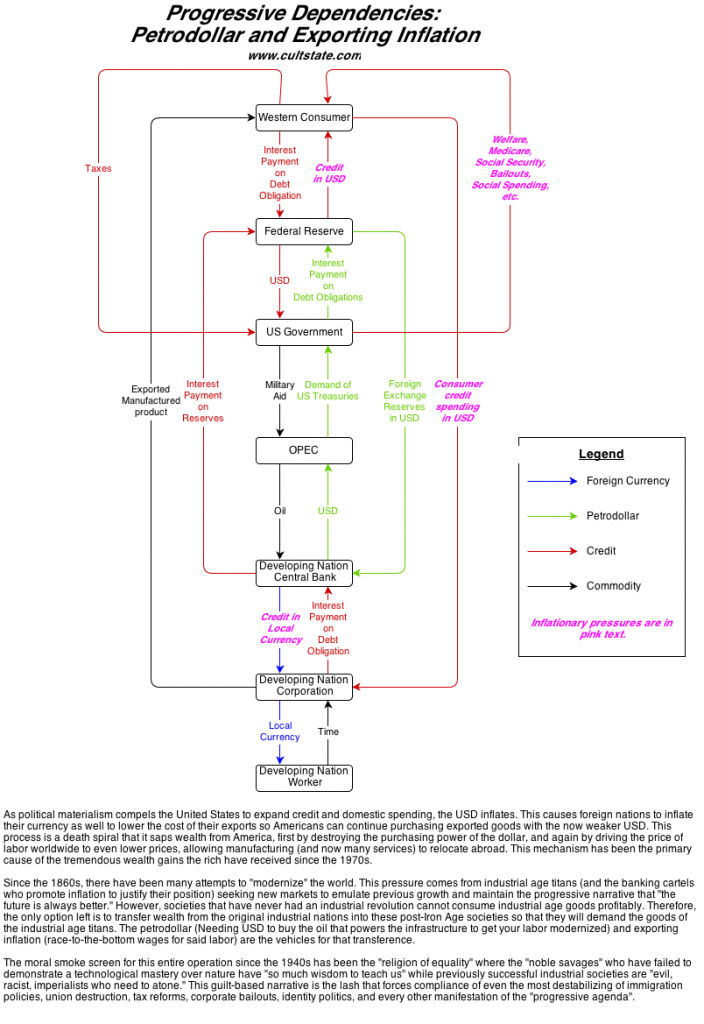 Don't let the environmentalist narrative and the promises of alternative energy confuse you. Without foreign oil consumption, progressives would be unable to fund their socialist utopia. Not only have time-saving machines allowed for the end of slavery and the rise of feminism, they have also magnified the shell game of financial capitalism, causing the "liberated" demographics to be the permanent vanguard of the financial elite.[/caption]

The Robodollar (03/15/2019)
How the world order can survive in a post-Icarus world
What Is A Cult State? (07/30/2018)
All nations must start as cults
The Butterfly War Begins (12/13/2017)
Asserting what Butterfly War means
The Ravens Will Starve (12/05/2017)
Tricking praetorians to over-rely on their social media panopticons
The Butterfly War (10/13/2017)
Spoof the metadata of minorities to take down Google
The Pivot (04/30/2017)
Nationalism has a chance as long as globalism is aggressively paranoid
Cyber War Cometh (10/17/2016)
Julian Assange isn't messing around.
The Planned Destruction of the Alt-Right (08/26/2016)
Chat logs of the planned destruction of the Alt-Right brand
The Shadow Emperor Hedge (06/15/2016)
Tech giants from the 90s and their Middle Eastern steersmen
Challenging the profit motives of globalism versus nationalism (02/28/2016)
When globalism fails, how can nationalism be used to balance the ledgers?
The War On Spontaneous Global Organization (01/23/2016)
Cass Sunstein leaves no stone unturned
After sixty-five years, France finally admits the end of Continental National Socialism (11/14/2015)
Continental National Socialism is the organizational method that emerges from the confluence of Swiss banking influence, German export dominance, and the remnants of French and Dutch colonial power suckling off of British and American geopolitical activity.
Petrocurrency Mercantilism (02/28/2015)
How the world actually works
The Putin Short and the Drone Long: The Rise of Petrocurrency Mercantilism (09/09/2014)
The birth of Robotic Nationalism